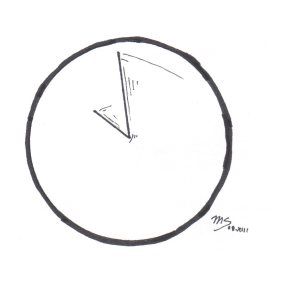 Blame American Benjamin Franklin for germinating the idea, back in the late 1700s, that has become the annual torment of trying to get out of bed an hour earlier between March and November – the annual discomfort commonly referred to as “Daylight Saving Time” or DST (or incorrectly, Daylight Savings Time).

One grating message that weather forecasters and others foist on us unbelievers is that DST gives us an extra hour of daylight. That man has done what God cannot do is truly a miracle since to add an extra hour of daylight is to go beyond the current parameters of nature. In fact we experience greater hours of sunlight as a result of the rotational relationship between the Sun and the Earth, more precisely because the tilt of the Earth as it moves around the Sun results in greater exposure to the Sun at certain times over the course of a 12-month period. Living in the Northern Hemisphere means we experience increasing hours of sunlight as the year progresses from March through to June; thereafter the hours of sunlight begin once again to diminish. For those who live in the Southern Hemisphere the same occurrence can be observed from September to December. Such is the phenomenon.

Yet, there are those who would like to play at adding an extra hour of daylight; or just as absurdly, daylight saving.

There are a few things in this reality that can never be saved, no matter how we word it. One is time; you can use less of it or more of it, but time cannot be saved. The other is energy of any kind, and that includes light.

Perhaps a better term would be ‘annual time shifting’. Although by any name it is still an uncomfortable adjustment, not the least for people who struggle with sleep disorders, or those of us who are not ‘morning people’. While early birds and night owls generally adjust to the shift in waking time, it can take weeks for those who are not morning people to adjust. In the meantime, they are sleep deprived and function less well.

Further, the rate of heart attacks actually increases in the first few weeks following the movement of the clock one hour ahead. Driving while sleep deprived is also a problem. While parents worry about sending their children off to school in the dim light of dawn. A sensible farmer would ignore all this silliness since the sudden change in schedule would have an unsettling effect on their animals.

People living in parts of Northern Ontario – Pickle Lake, New Osnaburgh, and Atikokan for example – do not go through this annual adjustment. They are located in the Central Time Zone and are already one hour ahead, but the point is they do not have to struggle with the annual change. It’s the same in Northern Quebec and Saskatchewan where DST is not observed.

The rest of us now spend close to eight months – from the second Sunday in March to the first Sunday in November – in this shifted time period when we have the maximum amount of sun exposure this region gets. So if the reason for the shift is to have more awake time during the sunniest part of the day, why not just maintain the time year round?

Historically it was the business sector that advocated for this annual change. Well, as the saying goes, what’s good for business is bad for people and vise versa.

Toronto writer and columnist Pat Watson is the author of In Through A Coloured Lens, available for Kindle, tablet or PC at Amazon.com.

About In Through A Coloured Lens e-Book

A young man searches for his identity. Young Black men lose their lives to the stories created about them that they then buy into. A mysterious bus driver documents an apocalyptic tale of our contemporary lives as it relates to the Book of Revelations. A woman speaks in the Council Chamber at Toronto City Hall to tell how her life went from normal to the desperation of depression, homelessness and then recovery. A northern city becomes known for its annual Caribbean carnival rivalling many similar celebrations around the globe. A little girl skips along a sidewalk, bringing memories of long forgotten childhoods. “In Through a Coloured Lens” is a compilation of timely and timeless columns selected from the hundreds I have written that have appeared over the past ten years in Share newspaper – “Canada’s largest ethnic newspaper”. Here are words on the lives of African Canadians and the issues that affect us here and also beyond our Canadian borders. With my particular insights colouring each view, themes range from family relations to race relations, politics to humour, mental health and poverty, and even spirituality. For added dimension, there are illustrations by M.W. Santerre.